Seas At Risk member, Surfrider Foundation Europe, is calling for an ambitious revision of the Offshore Safety Directive (2013/30/EU), due in 2020. Together with 23 partner NGOs from all over Europe, Surfrider launched a #DrillingIsKilling campaign to draw attention to the fact that offshore oil and gas exploration and exploitation remain authorised in 14 EU countries.

The campaign was launched on 20th April 2020, marking the 10th anniversary of the Deepwater Horizon offshore oil platform explosion in 2010, which led to the biggest oil spill in human history. 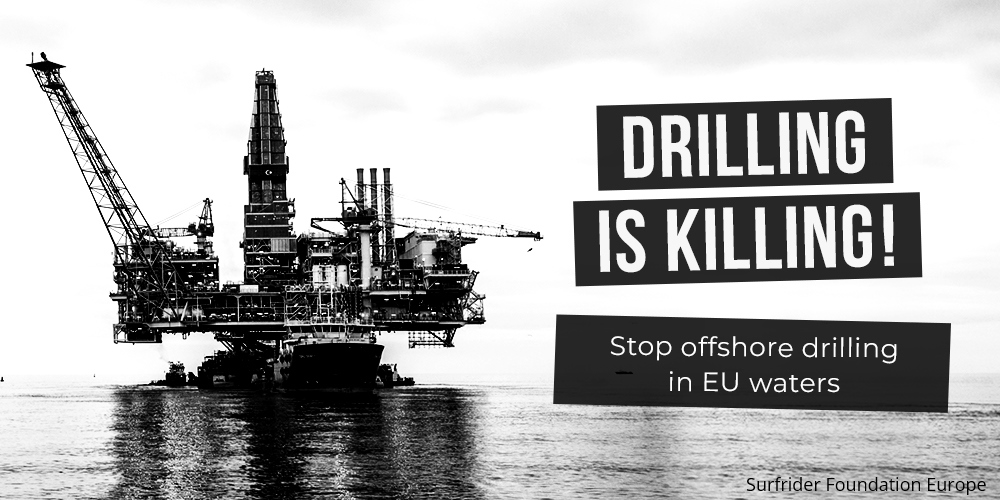 Some of the environmental risks are:

Offshore drilling also threatens the lives and livelihoods of coastal communities. European tourism and fishing industries employ 40 times more people than offshore oil and gas activities (2,570,000 vs 63,000 people in 2017) and generate five times more added value (€85 billion vs €17 billion in 2017). The offshore drilling industry’s economic contribution is small compared to the value added by the sectors it threatens most. Given the current oil crisis – which saw oil prices reach a historic minimum – abandoning this costly and dangerous activity seems increasingly necessary.

Surfrider Foundation Europe and all the signatories to the manifesto ‘Toward an EU offshore drilling ban’ are calling on the EU and its Member States to adopt a hardline stance against offshore drilling:

This plea echoes the call of more than 100 environmental organisations, which, led by Seas At Risk, BirdLife Europe, ClientEarth, Oceana, Surfrider Foundation Europe and WWF Europe, signed ‘The Blue Manifesto’, providing a roadmap for Europe to reach ambitious levels of ocean protection by 2030.

After launching the campaign on the 20th of April, Surfrider Foundation Europe will continue to work at the legislative level to push for an ambitious revision of the Offshore Safety Directive. Later in 2020, citizens will be encouraged to mobilise and raise this issue with their Members of the European Parliament, via a specially designed platform.