Latest / Press Releases / Europe at a crossroads: protecting the deep sea or letting mining destroy it?

Europe at a crossroads: protecting the deep sea or letting mining destroy it?

‘At a crossroads: Europe’s role in deep sea mining’ a new report published today by marine NGO Seas At Risk, exposes the role played by the EU, its Member States, the UK and Norway in this final mining frontier and provides a comprehensive analysis of their existing policies on deep-sea mining. It makes the case for the EU and Member States to prohibit deep-sea mining in European waters and to push for a global moratorium, as well as to set strong binding targets for material footprint reduction, including a drastic reduction in primary metals use. 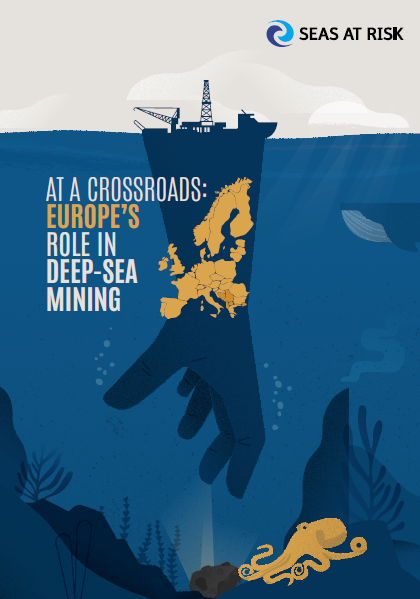 The report adds to the growing pressure on the EU and European countries to put the brakes on the race to mine the deep sea. Despite scientists’ stark warnings of irreversible biodiversity loss in one of the most fragile ecosystems on the planet, an area the size of France, Germany and the UK combined has been approved for deep-sea mining exploration in the Pacific, Indian and Atlantic Oceans. Several European countries have a substantial stake in this emerging sector – the first equipment tests are currently being conducted in the Pacific by Belgian company, Global Sea Mineral Resources.

The list of European countries sponsoring or holding exploration contracts in international waters now includes Belgium, Bulgaria, Czech Republic, Slovakia, Poland, France, Germany and the UK. Others, such as Spain, Portugal and Norway, have signalled their interest in exploring mineral deposits on their continental shelf. The tests currently underway in the Pacific herald imminent commercial deep-sea mining, which, if left unchecked, could begin on a large scale within a few years.

‘The EU is now at a crossroads’, says Ann Dom, Senior Policy Advisor at Seas At Risk. ‘As a major player in this race to the bottom, it can choose to champion the protection of deep-sea life instead of its destruction. It should lead by example, prohibiting mining in its territorial waters and pushing for a global moratorium in international waters’.

Seas At Risk’s report shows how millions of euros of EU funding have been used to develop deep-sea mining technologies and study their impact, while far fewer resources have supported research into deep-sea ecosystems, which are some of the least-known on earth.

Finally, the report puts forward 10 steps for Europe to support deep-sea protection – from setting binding targets for the reduction of the EU’s material footprint (as requested by the European Parliament) and banning the import of goods and raw materials containing deep-sea minerals, to reforming the International Seabed Authority [1] for greater accountability and shaping strong EU and national commitments to protect the deep sea.

Shifting gears toward a moratorium

After more than a decade of silent attendance at the International Seabed Authority negotiations, the EU seems to be shifting gears. At the request of the President of the European Commission, the Blue Growth Strategy – which promotes deep-sea mining as one of the EU’s top maritime sectors – will this year be reinvented as a Sustainable Blue Economy Strategy.

In order to avoid a mining boom, on land and in the deep sea, a resource-efficient European Green Deal is needed, focusing on wellbeing of planet and people, and aiming for a “growth without economic growth”, as advised by the European Environment Agency.

More specifically, if the European Green Deal is to achieve its climate and decarbonisation objectives, the EU needs to align its policies promoting digitalisation, renewable energy infrastructure and the shift to electric vehicles with binding targets for reducing consumption and the demand for primary metals.

Only by excluding deep-sea mining from the new Blue Economy Strategy, prohibiting mining in EU waters and pushing for a global moratorium will Europe be forced towards circularity and the deeper economic transition needed if we are to keep demand for metals within planetary boundaries and prevent environmental destruction.

Belgium is sponsoring an exploration contract in the Pacific by Global Sea Mineral Resources NV (GSR), a subsidiary of the DEME group. The Belgian government has thus positioned itself in favour of deep-sea mining, albeit within the context of strong environmental regulations. However, Belgium also seeks to present itself as a Blue Leader for ocean conservation, in direct conflict with its deep-sea mining ambitions. Positions on deep-sea mining are deeply divisive among the government coalition parties. Belgian NGOs are strongly advocating a moratorium and while a proposed moratorium resolution has been debated in the Belgian Parliament, it has yet to obtain sufficient support. In April 2021, GSR conducted the first-ever deep-sea mining equipment test in the Pacific, with the Greenpeace flagship, Rainbow Warrior, carrying out a protest action.

Germany currently holds two exploration contracts in the Pacific and Indian oceans. Deep-sea mining also featured in the 2018 coalition government agreement, with the intent to ensure security of supply for industry. Within the International Seabed Authority, Germany is pushing for strong environmental regulation and mandatory Regional Environmental Management Plans. Civil society organisations in Germany and the Pacific have been at the forefront of the calls to ban deep-sea mining.

Italy recently signalled its interest in deep-sea mining, with an agreement reached between Fincantieri and offshore services company Saipem, controlled by Eni and under the auspices of the Ministry of Foreign Affairs. Fincantieri noted the existence of poly-metallic sulphide deposits in the southern Tyrrhenian Sea, the only proven deposit of its kind in the Mediterranean. The environmental vulnerability of the area was ignored, however.

The UK is sponsoring two exploration contracts in the Pacific on behalf of Lockheed Martin subsidiary, UK Seabed Resources. However, the UK is simultaneously trying to present itself as a global leader in protecting the ocean. The government’s position on deep-sea mining has drawn increasing criticism from environmental groups, scientists and Members of Parliament (MPs) in recent years, with UK NGOs petitioning for a global moratorium. In response, the government stated that it will not sponsor or support the issuing of any exploitation licences for deep-sea mining projects unless and until there is sufficient scientific evidence on the potential impact on deep-sea ecosystems and strong environmental regulations.

Press release is also available in Portuguese and Spanish.

[1] International Seabed Authority is the UNCLOS-mandated body responsible for regulating all mineral-related activities in the high seas.