NGOs warn that thousands of common dolphins in the Bay of Biscay face horrific deaths in fishing nets this winter if the EU Commission does not step in with emergency measures to reduce bycatch, the single largest cause of harm and death to these dolphins today. Despite the legal requirement to protect this species and scientific recommendations [1] to close the fisheries responsible for the catches in this area, France and Spain are refusing  to do so [2].

Due to the lack of effective action from France and Spain, the organisations Seas At Risk, Whale and Dolphin Conservation, France Nature Environnement, International Fund for Animal Welfare, ClientEarth, WWF, Ecologistas en Acción, and Sea Shepherd France call on the European Commission to follow the scientific advice it requested and urgently close the fisheries responsible for the incidental capture and killing of thousands of dolphins in the Bay of Biscay every winter. The temporary closure of fisheries, from 1 December 2020 until 31 March 2021 would prevent unnecessary deaths of this iconic and protected marine species.

“We are running against the clock. If we do not act now, thousands of protected dolphins will be killed in fishing nets in the coming months – again. Only the temporary closure of the fisheries responsible for the incidental catches can prevent another season of mass deaths that are both unnecessary and unwanted”, says Andrea Ripol, Fisheries Policy Officer at Seas At Risk. She adds: “Earlier this year the Commission promised to take emergency measures if needed [3], and now is the time to do so.”

Sarah Dolman, Whale and Dolphin Conservation, says: “The European Commission urgently needs to adopt short-term emergency measures if it is to prevent dolphin deaths.  At the same time it must give France, Spain and other nations fishing in and around the Bay of Biscay the time to develop effective long-term measures to prevent bycatch of protected common dolphins.”

Sophie Mjati, France Nature Environnement, says: “Despite first announcing that they would close the fisheries responsible for common dolphin bycatch in the Bay of Biscay for six weeks this winter (during the national bycatch WG meeting in July 2020), France has now decided not to close the fisheries at all, citing a lack of scientific data. This, in fact, goes against ICES’s advice and Pelagis Observatory’s decades of work on this issue. Civil society is now urging the European Commission to take emergency measures and close the fisheries, as France is not capable of respecting its own laws or those of the  EU and international conventions.”

“It is incredible that after the speech from the Commissioner early this year, and the commitment taken, we are having  to ask for these important measures to be adopted. We fear that commitments undertaken in the biodiversity strategy are far from real action”, adds Eleonora Panella, Senior Campaigner at IFAW.

ClientEarth’s Wildlife and Habitats lawyer John Condon says: “France and Spain are already subject to legal action launched by the Commission for their failure to prevent bycatch. To stop this breach from being exacerbated, the Commission must urgently act to protect common dolphins in the Bay of Biscay.”

Dr Antonia Leroy, Head of Ocean Policy, WWF European Policy Office says: “Despite the EU infringement procedure launched by the European Commission last summer, France and Spain have failed to provide adequate mitigation measures to tackle the crisis of dolphin bycatch in the Bay of Biscay. As one of the main threats to marine mammals, already leading some of them to the brink of extinction, it’s time for the European Commission to impose emergency measures, including a fisheries closure this winter.”

“France cannot pretend that dolphins are a protected species and yet continue to allow hundreds of fishing boats with non-selective fishing methods to fish in the territory of the dolphins. We urgently need a fishing sector that is more respectful of the ocean and transparent about what is happening at sea. This is nowhere in sight!”, says Lamya Essemlali – President of Sea Shepherd France.

Ana Aldarias, Coordinator of Marine Issues at Ecologistas en Acción, says: “Spain is intervening very slowly to end the incidental capture of cetaceans in the Bay of Biscay, rather than taking the prompt action needed to save the dolphins. In light of the lack of meaningful action by Spain to date, we urge the European Commission to put in place emergency measures that will give time to Spain to coordinate with France to implement ambitious measures in the medium and long-term. This should be the first step in an integrated plan to end bycatch of all species in Spanish fisheries”. 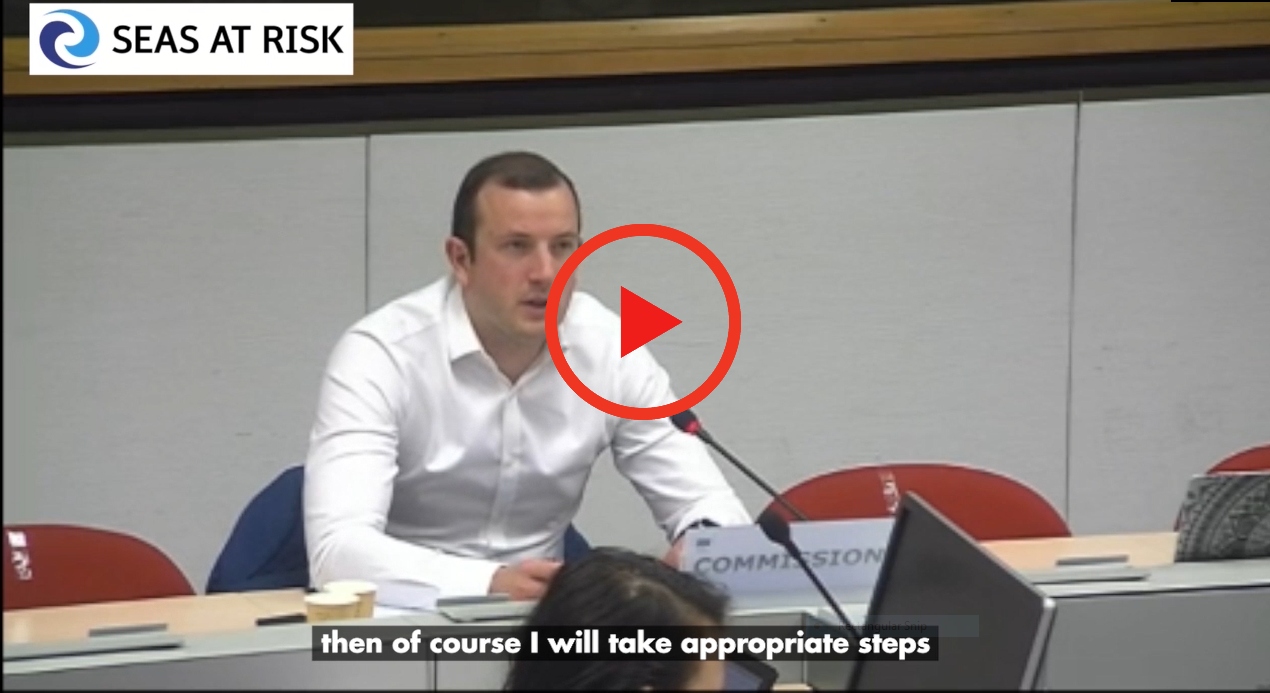 Scientists estimate that more than 10,000 common dolphins are killed in the Bay of Biscay every year due to harmful fishing activities, with peak deaths and strandings occurring between December and March.

Like other cetaceans, dolphins are strictly protected in EU waters [4]. Member States are obliged to minimise and, where possible, eliminate their incidental catch of non-targeted species by their fisheries [5]. The measures implemented by French and Spanish fleets in the Bay of Biscay to date are woefully inadequate. This has already been recognised by the Commission, which recently took legal action against the Member States for not implementing laws to protect dolphins from bycatch [6]. Following this,  the Commission submitted a request to Member States to submit joint recommendations to effectively address the incidental fisheries bycatch. However, this process is too slow and the proposed measures to date are inadequate, and  France has refused to close its fisheries this winter [7]. Further to the NGOs’ call for the immediate and temporary closure of these fisheries, implementation of Remote Electronic Monitoring (REM) is urgently required across the EU fishing fleet. This technology to monitor fishing activities is in line with the scientific advice issued by the International Council for the Exploration of the Sea (ICES), which acknowledged that bycatch is the main threat to this dolphin population and has also recommended the winter closure of the fisheries responsible for bycatch in the Bay of Biscay. ICES’ advice follows a complaint by 26 NGOs [8] to the European Commission, asking it to initiate infringement proceedings against France and the 14 other European governments for failing  in their obligation to protect cetaceans from harmful fisheries activities. The addition of hundreds of scientists and conservationists calling for a global action to protect dolphins and other cetaceans from extinction [9], stressing the magnitude of the threat posed to cetaceans by fishing nets, means that any further delays to action are simply unacceptable.

ClientEarth is a charity that uses the power of the law to protect people and the planet. We are international lawyers finding practical solutions for the world’s biggest environmental challenges. We are fighting climate change, protecting oceans and wildlife, making forest governance stronger, greening energy, making business more responsible and pushing for government transparency. We believe the law is a tool for positive change. From our offices in London, Brussels, Warsaw, Berlin and Beijing, we work on laws throughout their lifetime, from the earliest stages to implementation. And when those laws are broken, we go to court to enforce them.

FNE was created in 1968 and gathers more than 3500 local NGOs from all France including overseas territories, working on a range of environmental areas (oceans, energies, forests, agriculture, health, education, transports, waste, etc.). Therefore, FNE’s objective is to give voice to the civil society and protect the terrestrial and marine environment. FNE is involved at a local, regional, national and European level.

International Fund for Animal Welfare is a global non-profit organisation helping animals and people thrive together. We are experts and everyday people, working across seas, oceans, and in more than 40 countries around the world. We rescue, rehabilitate, and release animals, and we restore and protect their natural habitats

WWF is an independent conservation organisation, with over 30 million followers and a global network active in nearly 100 countries. WWF’s mission is to stop the degradation of the Earth’s natural environment and to build a future in which humans live in harmony with nature, by conserving the world’s biological diversity, ensuring that the use of renewable natural resources is sustainable, and promoting the reduction of pollution and wasteful consumption.

Ecologistas en Acción is a confederation of more than 300 environmental groups distributed by towns and cities in Spain. It is part of the so-called social ecologism, which understands that environmental problems have their origin in an increasingly globalized production and consumption model, from which other social problems also derive, and that must be transformed if an ecological crisis is to be avoided. Because of that we work from local to international level.

Sea Shepherd France is a non-profit marine conservation organization that engages in direct action campaigns to defend wildlife, and conserve and protect the world’s oceans from illegal exploitation and environmental destruction. Since the beginning, Sea Shepherd France has used innovative direct action tactics to defend, conserve and protect the delicately-balanced biodiversity of our seas and enforce international conservation laws.

[4] The species of the common dolphins is strictly protected under the Habitats Directive (Council Directive 92/43/EEC of 21 May 1992 on the conservation of natural habitats and wild fauna and flora) https://eur-lex.europa.eu/legal-content/EN/TXT/?uri=CELEX:31992L0043