On the 23rd of August the European Commission released its proposal for Baltic Sea fishing opportunities for 2023. Over and all, the Commission applied a precautionary stance when setting the recommendations for Total Allowable Catches (TACs) for next year which is to be commended. Many fish populations in the Baltic Sea are in a bad state with overfishing as one of the main drivers of the decline.

The two cod stocks in the Baltic, both of which are in a critical state, get no increase in catch opportunities from last year. No targeted fishing on either stock will be allowed, only a by-catch TAC of 489 t for Western Baltic Cod (WBC) and 595 t for Eastern Baltic Cod (EBC). The Commission addressed the fact that the WBC population is now below safe biological limits and that the biomass is at a historic low by taking a precautionary stance (read motivations from the Commission here). A wise decision, especially as there are many uncertainties regarding the status of the stock. This was outlined in detail in our joint NGO TAC recommendations. It is now vital that the announced mandatory selectivity measures for cod are implemented with urgency and that bycatches are monitored independently, for example through Remote Electronic Monitoring.

Regarding the herring stocks, for the highly threatened western herring the Commission proposes that no directed fishing is allowed, just a by-catch only TAC of 788 t. For Gulf of Bothnia herring a decrease TAC of 28%, is proposed, this corresponds to an FMSYlower * value from the Baltic Sea Multi Annual Plan.This is a precautionary move motivated by the stock decline and the widy reported decrease of fish size. The Riga herring gets a TAC decrease of 4%, this is in line with scientific advice. Finally, for central Baltic herring a 14% increase is proposed motivated by a small improvement in stock size. The proposed TAC corresponds with the FMSYlower value, again applying a precaution approach and only allowing moderate increase since the stock size still is below healthy levels.

The TAC for sprat is reduced by 20% the reasons given are that there is widespread misreporting of sprat and herring catches, which makes the data uncertain. The Commission also points to the importance of sprat as a food source for the highly threatened cod populations, in this way incorporating ecosystem considerations in the TAC proposal.

The importance of cod protection is also seen in the proposal for plaice. While the size of the plaice stock gives room for a sharp increase in fishing, the TAC proposal limits the increase in catch opportunities to 25%, still a substantial increase. The TAC is not increased more to protect cod which is an important bycatch in plaice fisheries. The Commission points out that new rules will soon oblige the fishermen to use new fishing gear which hopefully will decrease the by-catch substantially. For the salmon, there is no change proposed from last year.

This proposal shows that the Commission is willing to take steps to protect the Baltic ecosystem. We now ask the Member States around the Baltic to follow Commissioner Sinkevicius’ lead and support and strengthen this proposal in the October fisheries council meeting.

Below is the Commission’s own summary table of the proposal. 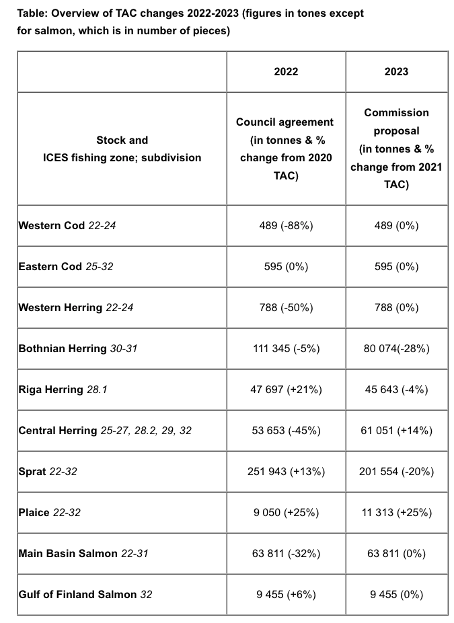