NGOs concerns over EU countries’ inadequate response to the bycatch of protected species have now been confirmed by the evaluation of the Scientific, Technical and Economic Committee for Fisheries (STECF) [1].

With respect to the measures proposed by France, Spain and Portugal to reduce bycatch of common dolphins in the Bay of Biscay, it concludes that measures are insufficient to prevent the many thousands of incidental killings recorded every year. Regarding measures for the Baltic Proper harbour porpoise brought forward by Baltic Member States, STECF highlights that these proposals have the potential to reduce incidental catches in marine protected areas but they leave out crucial measures recommended by scientists to minimise bycatch of this critically endangered species in the wider region. 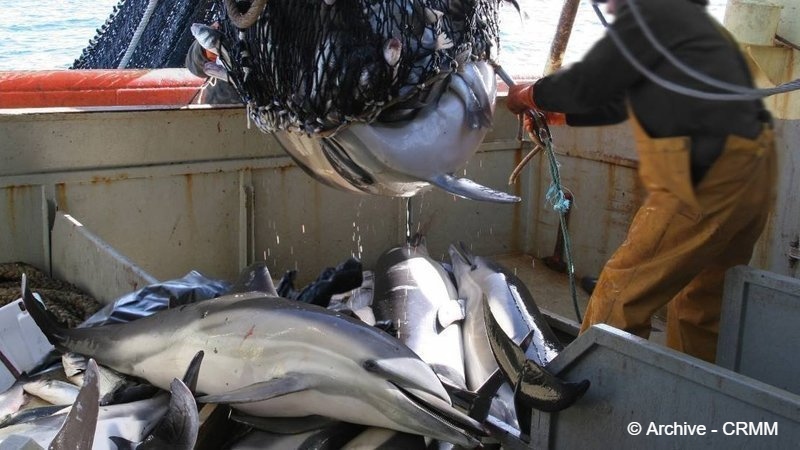 The increase in dolphin mortality due to bycatch, and the negative evaluation from STECF of the currently proposed measures by France, Spain and Portugal should be taken very seriously by governments of France and Spain, which are under legal pressure due to their innaction, following infringement action taken by the Commission [6].

On the other hand, measures proposed by Baltic Member States to prevent bycatch of the critically endangered Baltic Proper harbour porpoise follow parts of the scientific advice more closely. STECF’s scientists have now concluded that, if effectively implemented, these measures will ‘contribute to reducing incidental catches of the harbour porpoise in the Baltic’ [7], however, they are unlikely to eliminate the threat entirely. Given that every single bycaught porpoise threatens the future of this small population [8], marine NGOs have expressed concern that the proposal only covers measures in Marine Protected Areas, neglecting the wider Baltic Sea area, where bycatches are as likely to occur. Furthermore, Baltic Member States are under legal obligation to protect the harbour porpoise throughout its habitat range, not only in Marine Protected Areas.This concern is also highlighted in the STECF’s evaluation.

There is no time to waste for the Baltic porpoise and while Baltic Member States aim to submit a second set of proposals by June 2021, NGOs are calling on them to urgently include measures covering the entire Baltic Sea region as well as measures for recreational fishers, in line with scientific advice. Until such measures are implemented, the European Commission must promptly adopt emergency measures to protect the Baltic Proper harbour porpoise.

Andrea Ripol, Fisheries Policy Officer, Seas At Risk said: “The message is clear – the measures proposed by France and Spain fall short of any ambition and are clearly not enough to prevent the deaths of thousands of dolphins, which is a growing concern for the public. Over 300,000 people have signed a petition demanding urgent action. Science and public opinion are aligned. Why shouldn’t then decision makers act accordingly? We count on the European Commission to reject this proposal and on Commissioner Sinkevičius to keep his word and to step in.”

Sarah Dolman, Bycatch programme lead at Whale and Dolphin Conservation said: “More dolphins were bycaught in the Bay of Biscay last winter than have been recorded for more than a decade. Member States wasted time proposing inadequate measures which do not meet the scientific requirements presented twice now by regional experts, ICES and STECF. The Commission must act urgently to enforce EU law and require robust measures that will prevent further deaths of dolphins and porpoises.”

Cecilia del Castillo, fisheries campaigner at Ecologistas en Acción said: “Uneffective measures have resulted in hundreds of dead dolphins for another consecutive winter in the Bay of Biscay. Commissioner Sinkevičiust, it is time to demand the French and Spanish governments to stop procrastinating. The scientific advice is clear: temporary closures of fisheries are required to cease with this disaster at once”.

Ida Carlén, Biodiversity and Nature Conservation Officer at Coalition Clean Baltic and Chair of the ASCOBANS Jastarnia Group, said: “The Baltic Proper harbour porpoise population is critically endangered and even one animal bycaught poses a serious threat to the survival of the population. Member States must act to save the only whale in the Baltic, and they must act now.”

Cathrine Pedersen Schirmer, senior marine policy officer at The Danish Society for Nature Conservation said: “The Baltic member states are undermining the implementation of effective measures throughout the entire distribution range of the baltic harbour porpoise by cherry picking measures recommended by ICES regarding marine protected areas, while stalling the implementation of measures throughout the Baltic Proper. This delayment tactic is very regrettable, as harbour porpoises don’t self contain themselves to marine protected areas, but have a broad distribution range in which they need to be protected against incidental bycatch. We therefore call on the Baltic member states to agree on bycatch measures that follow the entirety of the ICES advice without further delays”.

Sophie Mjati, Oceans, Seas and Coastline coordinator at France Nature Environnement, said: “More than 65 000 dolphins have died in the fishing nets of the Bay of Biscay since 2000. The refusal of governments to act is deafening and may lead to a disappearance of the population”.

[1]  The Scientific, Technical and Economic Committee for Fisheries (STECF) provides scientific advice for fisheries management to the European Commission.

[4] Scientists estimate that the final death toll is much higher, as only a small percentage of the dolphins that die in fishing nets end up on beaches, with a much larger number of dead dolphins drifting out to the open ocean or sinking to the bottom where they cannot be counted.

[6] The need for action comes following a major intervention made by NGOs in 2019, which urged the Commission to take legal action against 15 EU governments for their failure to protect vulnerable marine mammals. Following concerns raised by NGOs, Scientists from the International Council for the Exploration of the Sea (ICES) published an advice last year advising the European Commission on measures to minimise or eliminate the bycatch of the common dolphin in the Bay of Biscay and the Baltic Proper harbour porpoise. NGOs have since expressed their concerns about the measures proposed by Member States repeatedly to the European Commission and the Member States.

Additional information on the lack of effective action from France and Spain and the need for emergency measures is available here.

Coalition Clean Baltic (CCB) is a politically independent, non-profit association, which unites 23 member organizations and 1 observer, with over 850,000 members in all countries around the Baltic Sea. The main goal of CCB is to promote the protection and improvement of the Baltic Sea environment and its natural resources. More info at: www.ccb.se

Ecologistas en Acción is a non-governmental umbrella organisation of over 300 environmentalist groups throughout Spain that was founded in December 1998 and is one of the top five environmental groups active in Spain today. The organisation’s guiding principles are built around the core concept of social ecology, which views environmental problems and the global ecological crisis as rooted in an increasingly unsustainable and globalized model of economic production and consumption.

The Danish Society for Nature Conservation (DN) is a non-profit, non-governmental membership based organisation that works to conserve nature and the environment in Denmark through local work, conservation, lobbying and specific projects. DN is the largest green NGO in Denmark with 130.000 members and over 1.500 active volunteers.