In early September, France will host the World Conservation Congress in Marseille. This major event brings to together the international community to discuss the most pressing issues in nature conservation. Yet France refuses to act on a tragedy that has been occurring for years in its own waters: the slaughter of dolphins and porpoises, caught by the thousands in fishing nets in the Bay of Biscay.

Since December 2020,  more than 800 dolphins and porpoises stranded or drowned animals. Over the past 30 years, more than 100,000 dolphins have died in fishing nets in the Bay of Biscay.

“When these animals are trapped in fishermen’s nets, they die of asphyxiation, in long and painful agony. We are outraged by this suffering of animals, which has been going on for 30 years in the same places, at the same times and with the same fishing methods”, explains Alain Bougrain-Dubourg, President of the French League for the Protection of Birds. It should be added that many of the dolphins found on our beaches have been deliberately disembowelled, probably so that they would sink to the bottom of the ocean, far from the eyes of the public.

Nevertheless, the French government still refuses to stop France’s deadly fishing practices, even though such a suspension has been recommended by several European scientific bodies and the Scientific Committee of the International Whaling Commission. In fact, France has received a formal notice from the European Commission and risks being sanctioned by the Court of Justice of the European Union. Would the French government rather burden taxpayers with a fine than prevent the death of thousands of dolphins, year after year? Is France willing to take the risk of seeing these protected species disappear?

France tries to portray itself as a leader in nature protection on the international scene, while it does exactly the opposite on its own territory. “Faced with an unprecedented loss of biodiversity, it is both incomprehensible and unbearable that France should host the World Conservation Congress even as it refuses to listen to scientists and allows the slaughter of dolphins in its own waters to continue”, says Elodie Martinie-Cousty, head of France Nature Environnement’s Oceans, Seas and Coastlines Network.

After taking the case to the European Court of Justice (together with the French League for the Protection of Birds and 24 other European NGOs), France Nature Environnement sued the French government for its refusal to take action last winter and its unwillingness to strengthen scientific monitoring measures. France Nature Environnement and the French League for the Protection of Birds are calling for an eight-week suspension of these harmful fishing methods during the winter of 2021-2022, as well as an annual reduction of at least 25% in the number of dolphins caught.

“France has repeatedly failed to introduce measures to prevent unnecessary deaths of dolphins in the Bay of Biscay, despite being legally obliged to do so by EU law. The European Commission cannot just stand by while thousands of killed dolphins are washed up on our beaches each winter.” said Christine Adams, Fisheries Policy Officer at Seas At Risk. “We need to see long overdue actions now to ensure that EU law is respected, and dolphins remain in our oceans and not on our beaches.” 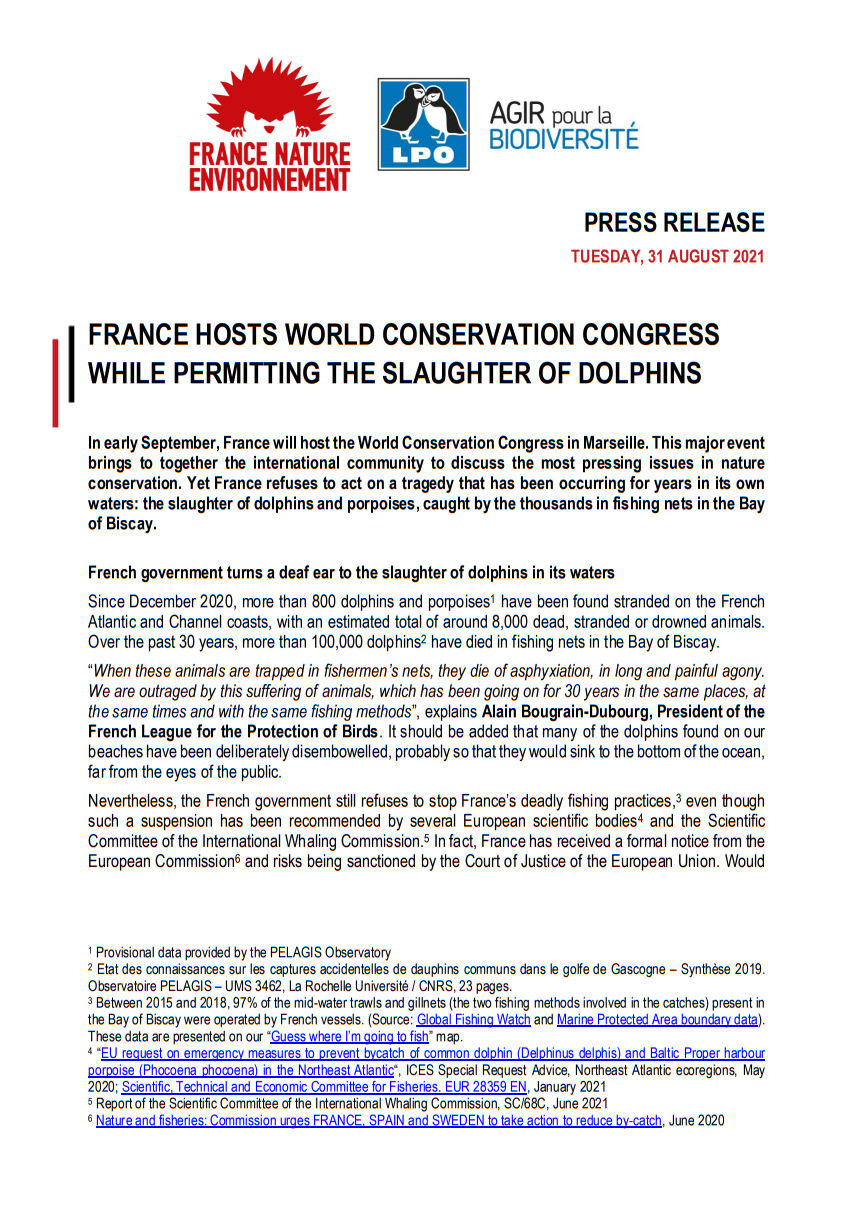