As a meeting of the International Maritime Organization’s (IMO) Sub-Committee on Pollution Prevention and Response (PPR 6) opens today in London, the Clean Arctic Alliance called on Member States to remain focussed to the goal of developing a ban on the use and carriage of heavy fuel oil by shipping in the Arctic. 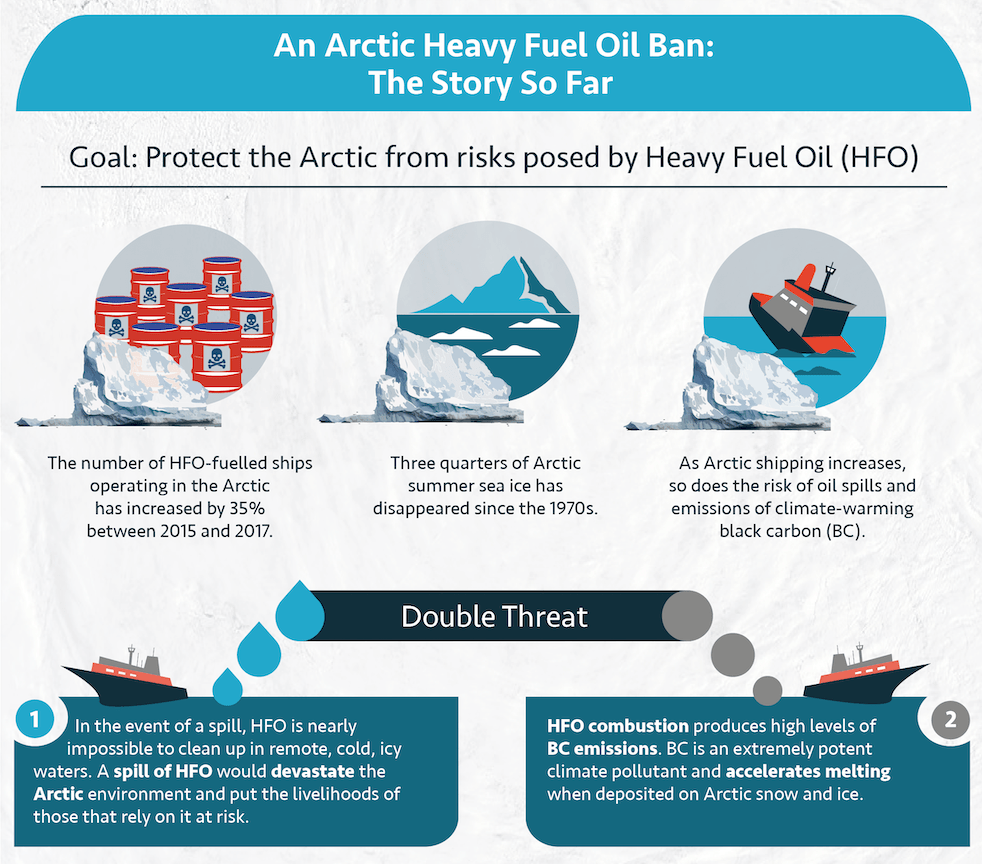 “While IMO delegates gather to discuss ways to mitigate the impacts of heavy fuel oil (HFO) – the dirtiest of ships’ fuels – on Arctic ecosystems, IMO member states must keep their sights firmly on the need for a ban, especially in light of recent revelations from the IPCC on the urgent need to limiting the effects of climate change on the Arctic region”, said Dr Sian Prior, Lead Advisor to the Clean Arctic Alliance [1].

“The Arctic is warming faster than anywhere else on earth – and as sea ice recedes, any increased HFO-fueled shipping in the region will exacerbate the climate crisis, through the deposits of black carbon caused by the burning of HFO, onto sea ice and ice caps. By banning both the use and carriage of HFO as fuel from ships operating in Arctic waters, the risks of a catastrophic oil spill can also be avoided. The Clean Arctic Alliance calls for the work on the development of the Arctic HFO ban to be concluded swiftly, so that it can be adopted in 2021, and phased in by 2023”.

At October’s IMO gathering of the Marine Environment Protection Committee (MEPC 73), support for the work – to mitigate the risks of using and carrying HFO in the Arctic, including developing a ban – to commence at the PPR 6 technical meeting, was voiced by Austria, Bangladesh, Canada, Denmark, Finland, France, Germany, Iceland, Ireland, Netherlands, New Zealand, Norway, Spain, Poland, the United States and the UK.

Side Event at PPR6

A lunchtime side event, ‘New research and an Indigenous perspective on a ban of HFO use and carriage as fuel, in the Arctic’, hosted by WWF, will take place at the IMO on Tuesday, Feb 19th from 1320 to 1350. The panelists include:

[1] Summary for Policymakers of IPCC Special Report on Global Warming of 1.5°C approved by governments https://www.ipcc.ch/2018/10/08/summary-for-policymakers-of-ipcc-special-report-on-global-warming-of-1-5c-approved-by-governments/

At MEPC 72 in April 2018, Arctic states of Finland, Iceland, Sweden, Norway and the United States, along with Germany, the Netherlands and New Zealand, proposed a ban on the use and carriage as fuel of HFO by ships operating in the Arctic as the simplest approach to reducing the risks associated with HFO. The proposal, along with a proposal to assess the impact of such a ban on Arctic communities from Canada, was supported by Australia, Belgium, Czech Republic, Denmark, Estonia, France, Ireland, Japan, the League of Arab States, Poland, Portugal, Spain, Switzerland, and the UK leading to an agreement, in principle, to the ban. Support from Denmark was particularly notable as it is the sixth Arctic nation to support the ban. In September, Greenland announced that it would add its support for a ban. Support from non-Arctic countries was significant as many can and do flag ships operating in the Arctic.

In July 2018, the Inuit of Alaska, Canada, Greenland and Chukotka added further weight to the calls to end the use of HFO in the Arctic in theUtqiagvik Declaration (page 4). In October 2018, the Alaska Federation of Natives passed a resolution calling for a concerted effort to convince decision-makers to phase out the use of heavy fuel oil, or HFO, in Arctic waters – read draft resolutions document here.

Canada and Russia have both supported IMO work to consider ways to mitigate the risks associated with HFO, but Canada has yet to take a position on a ban.

Recent analysis by CE DELFT of the potential impact of a HFO ban on consumer goods found that additional costs of food shipped to Iqaluit in Northern Canada would increase household expenditure by 0.2%, assuming that the ban-related additional transport costs are fully passed on (although other newly published research has shown that there was no correlation between fuel costs and food prices in the same region between 2014 – 2017). The Clean Arctic Alliance calls on governments to consider how to mitigate any possible cost increase, however small, that could be experienced by Arctic communities.

To date, Russia has considered a ban on use of HFO in the Arctic as a “last resort”. However, one of the biggest users of HFO in the Arctic, Russian state-owned shipping company Sovcomflot has spoken openly about the need to move away from oil-based fuels, and marine bunker fuel supplier Gazpromneft expects to halt fuel oil use from 2025. Significantly, in August 2018, Russian President Vladimir Putin and Finnish President Sauli Niinistomade a joint statement on the need to move to cleaner ships’ fuels, such as LNG in the Arctic. Furthermore, Russia has also announced its intention to massively increase the volumes of cargoes transported on the Northern Sea Route – setting itself a target of 80 million tonnes by 2024, of which 40% would be LNG. For more information, see our paper Heavy Fuel Oil use in the IMO Polar Code Arctic by Russian-flagged Ships, 2015.

Support for a ban on the use and carriage of HFO has grown since the Arctic Council published its 2009 Arctic Marine Shipping Assessment (AMSA), identifying that an oil spill is the greatest threat to the Arctic from shipping; according to Det Norske Veritas (DNV), in a report published by the Arctic Council, using distillates instead of HFO as fuel would achieve significant spill risk reduction. The Arctic Commitment, launched in 2017 by the Clean Arctic Alliance and Hurtigruten has been signed by more than 130 cruise operators, journalists, explorers, shipping companies, indigenous representatives and others, calling for a ban (see more below)

Heavy fuel oil is a dirty and polluting fossil fuel that powers ships throughout our seas and oceans – accounting for 80% of marine fuel used worldwide. Around 75% of marine fuel currently carried in the Arctic is HFO; over half by vessels flagged to non-Arctic states – countries that have little if any connection to the Arctic.

The Arctic is under pressure – climate change is fuelling temperature rises double the rate of further south. As sea ice melts and opens up Arctic waters further, even larger non-Arctic state-flagged vessels running on HFO are likely to divert to Arctic waters in search of shorter journey times. This, combined with an increase in Arctic state-flagged vessels targeting previously non-accessible resources, will greatly increase the risks of HFO spills.

Already banned in Antarctic waters, if HFO is spilled in cold polar waters, it breaks down slowly, proving almost impossible to clean up. A HFO spill would have long-term devastating effects on Arctic indigenous communities, livelihoods and the marine ecosystems they depend upon. HFO is also a greater source of harmful emissions of air pollutants, such as sulphur oxide, and particulate matter, including black carbon, than alternative fuels such as distillate fuel and liquefied natural gas (LNG). When emitted and deposited on Arctic snow or ice, the climate warming effect of black carbon is up to five times more than when emitted at lower latitudes, such as in the tropics (see infographic: Responding to Arctic Shipping Oil Spills: Risks and Challenges).

More than 130 shipping companies, cruise operators, ports, businesses, explorers, non-governmental organizations and politicians have put their name to the Arctic Commitment, an ambitious civil society initiative calling for ban on heavy fuel oil (HFO) from Arctic shipping, since its launch in Tromsø in January 2017.

Conceived by the Clean Arctic Alliance and expedition cruise ship operator Hurtigruten, the Arctic Commitment aims to protect Arctic communities and ecosystems from the

risks posed by the use of heavy fuel oil, and calls on the International Maritime Organization (IMO) to ban its use and carriage as fuel by Arctic shipping.