Latest / Press Releases / France, Spain and Italy must stop playing russian roulette with their Mediterranean fisheries, and instead abide by EU law they committed to

France, Spain and Italy must stop playing russian roulette with their Mediterranean fisheries, and instead abide by EU law they committed to

Ahead of the EU Agriculture and Fisheries Council (AgriFish) on 12 and 13 December 2021, Environment NGOs are extremely concerned that France, Spain and Italy are playing political games that risk burying all hopes to save Western Mediterranean fisheries.

The Western Mediterranean is plagued by unacceptable overfishing – 2.71 times higher than sustainable levels, and well-above the Common Fisheries Policy (CFP) limit. The crisis can only be solved by following science and adopting drastic measures to tackle overfishing and protect key habitats that support fish stock recovery. This requires several combined actions:  fishing effort reduction paired with properly allocated catch limits; improved selectivity measures to stop catching juvenile fish (such as grids, T90 and bigger mesh size of the cod end); and spatial measures, namely the creation of permanent fisheries closures to protect sensitive habitats like nurseries and spawning grounds of fish stocks. Overall, a clear plan for a transition of the trawling sector is needed.

The NGOs provided the following statement: “In 2019, Spain, France and Italy committed to deliver sustainable fisheries in the Western Mediterranean by 2025, delaying by five years the sustainability obligation set by the CFP for 2020. Today, scientists are raising the alarm: none of the 2022 management scenarios evaluated will end overfishing by 2025 unless those same countries adopt drastic reductions in fishing effort. To prevent France, Italy and Spain from continuing to jeopardize the future of Mediterranean fisheries and the thousands of EU citizens that rely on it for their livelihoods, we call on the European Commission to act with emergency measures, before it’s too late”.

NGOs are sensitive to the potential socio-economic impact of these measures. Implementation at national level should include transition support plans, with clear incentives for best environmental and social practices (as requested by Article 17 of the CFP). These plans should be attached to the implementation of the Western Mediterranean Multiannual plan (MAP), contributing to a modern management plan that adopts bio-economic tools in the decision making processes to minimize the socio-economic impact while meeting the MAP’s objectives.

The “Landing obligation” introduced by the CFP has not been enforced, selectivity measures have not been adopted, too few and too small nursery areas have been closed to fishing, and fishing effort is still too high. This is stated not only by environmental groups, but by scientists too, including the Scientific, Technical and Economic Committee for Fisheries (STECF), the fisheries scientific body of the European Commission.

Time is ticking and fish stock collapse may soon become a stark reality in the Mediterranean. In certain areas, European hake is fished at more than 8 times the sustainable levels, red mullet and blue and red shrimp over 6 times, resulting in catches shrinking and fishers being pushed into economic turmoil.

The 2021 December AgriFish EU Council is the last opportunity to show political leadership by adhering to the Western Mediterranean Multiannual Plan adopted in 2019.

It would have been a difficult moment if we did not know what to do. But proven solutions exist: drastic fishing effort reduction combined with enforcement, wide-scale adoption of selectivity, and the introduction of a larger network of fisheries closures, coupled with transitional support to coastal communities.

France, Spain and Italy cannot ignore science any longer, undermine the credibility of the CFP and of the EU, and drive Western Mediterranean fish stocks, and the future of the fishing communities that rely on them, to a disastrous collapse. 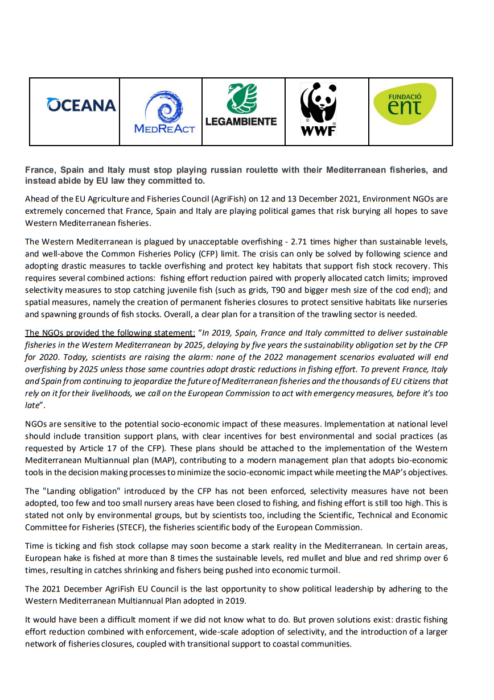 EU Fisheries Ministers to Proudly Keep on Overfishing in 2022