A giant colourful pop-up book depicting the devastation caused by destructive bottom trawling – and how the marine environment thrives in its absence – was delivered to European Union (EU) Commissioner Virginijus Sinkevičius by NGOs this morning, on behalf of more than 150,000 Europeans who have signed a petition calling for the EU to phase out destructive fishing practices, starting with an immediate ban of bottom trawling in all Marine Protected Areas. [1] The tens of thousands of signatories are demanding that EU Commissioner Sinkevičius (responsible for the environment, ocean and fisheries) and EU Commission Executive Vice-president Frans Timmermans (responsible for the EU Green Deal) include a ban on bottom-trawling in the upcoming EU ‘Action plan to conserve fisheries resources and protect marine ecosystems’ (Ocean Action Plan), to be adopted next spring. Bottom trawling, the most harmful fishing method for the environment and climate, is widely used in Europe where it impacts more than 50% of the seabed, and even takes place inside Marine Protected Areas.

Oceana, Seas At Risk, Our Fish, WeMove Europe, Whale and Dolphin Conservation, and Environmental Justice Foundation, delivered the 1.5m by 2.5m pop-up book, which features both Commissioners Sinkevičius and Timmermans embarking on an ocean adventure modeled on The Life Aquatic, a popular film which references the work of famous ocean explorer and conservationist Jacques-Yves Cousteau, outside the European Commission headquarters in Brussels. The book presents a story on how the EU has the chance to turn the tide on destructive fishing by banning bottom-trawling, through a journey from current underwater devastation to a healthy, thriving and resilient marine environment. Vera Coelho, Senior Director of Advocacy at Oceana in Europe said “Marine Protected Areas, as the name suggests, are supposed to afford protection to marine life, yet in 2020 over 2.5 million hours of bottom-trawling took place inside them. It is unacceptable that the EU continues condoning the destruction of the very places it has committed to protect. This madness can and must be fixed now, for good.”

Tobias Troll, Marine Policy Director at Seas At Risk added “European citizens start to realise that the seas are fragile ecosystems that need protection because they are the life support system of the planet. Destructive fishing techniques like bottom trawling must end, inside marine protected areas but also beyond. We need a just transition to low impact fisheries to protect biodiversity and allow future generations of small scale fisherfolk and coastal communities to have a good life.”

Rebecca Hubbard, Program Director, Our Fish said “We can’t just continue with pledges and promises forever – we are running out of time and every ton of carbon counts. It’s time that the EU got serious about transitioning out of destructive fishing methods such as bottom trawling, which produces CO2 emissions through burning fuel, releasing carbon stored in the seabed, and depleting fish populations, and instead secured a sustainable and resilient future for our climate, ocean and coastal communities.”

Giulio Carini, Senior Campaigner, WeMove Europe said: “Almost half of the EU population lives within 50 kilometers of the sea, and no one wants to have a devastated and dead ocean for decades to come.”

Steve Trent, CEO, Environmental Justice Foundation said: “As well as destroying ocean ecosystems, endangering wildlife, and threatening coastal livelihoods, bottom trawling is also hastening climate breakdown. This practice churns up the seabed, releasing vital stores of carbon that have lain safely locked away for centuries. It is gravely disappointing that the EU, which has led progressive efforts to improve sustainability in fisheries, still allows bottom trawling within protected areas. This must end now.”

– Bottom-contacting gear, including dredging and bottom trawling, is the most unselective and destructive fishing gear. The method involves dragging heavy weighted nets across the sea floor, indiscriminately catching all types of living creatures and habitats that happen to be on their way. Such trawling can strip up to 41% of invertebrate life from the sea-bed, and the ocean floor can take many years to recover. Its continuous use has led to drastic, and in some cases irreversible, degradation of marine ecosystems including habitats like corals and seagrass, as well as sensitive species like sharks, turtles and dolphins. Moreover, bottom trawling disturbs the seabed and releases large amounts of carbon stored in sediments into the sea – novel, early-stage research suggests a level of released carbon that would put it on par with the aviation sector (study).

– Recent data by Oceana revealed how EU countries continue to allow destructive fishing in Europe’s Marine Protected Areas, with over 2.5 million hours of bottom fishing occurring in 2020 inside areas supposedly designated to protect Europe’s most valuable and threatened marine species and habitats.

– A socioeconomic analysis commissioned by Seas At Risk has revealed that a ban on bottom-contacting gear (bottom trawling and bottom dredging) in Marine Protected Areas would yield net benefits as soon as four years after the ban comes into force.

– The EU Action plan to conserve fisheries resources and protect marine ecosystems, announced in the EU 2030 Biodiversity Strategy, is expected in 2022. An EU public consultation is opened until December 20th.

[1]: Petition “Stop destroying our ocean” on the WeMove Europe platform.

Photos and video footage of the petition delivery: 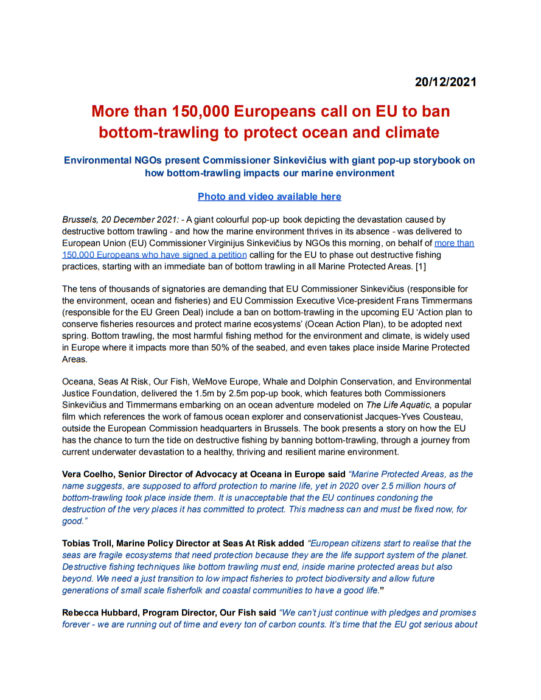 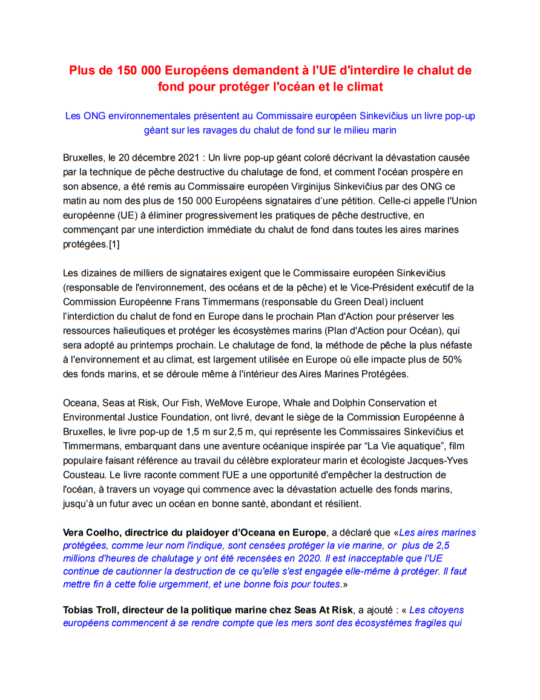 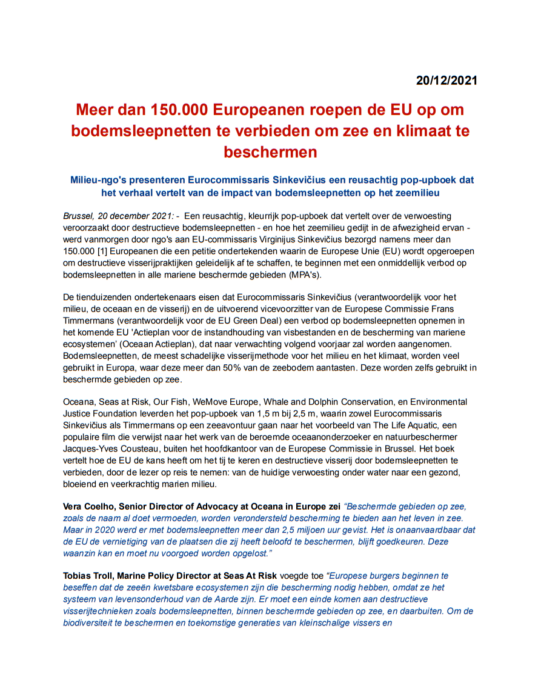